How safe is the Caribbean?

How safe is the Caribbean?

The first thing that comes to mind for most when thinking about the Caribbean is turquoise seas, light breezes and the chink of ice cubes in glasses of rum. The Caribbean region is very beautiful and very diverse, from the unspoilt rain forests of Dominica to the beaches and islands of Exuma to the hills and mountains of Dominican Republic.

According to Caribbean Tourism Organization figures for 2017, the Caribbean saw around 30 million visitors from around the world, fast becoming a mecca for package holidays and honeymooning couples, the Caribbean has something for everyone.

Jamaica is the top destination in the Caribbean, followed by Puerto Rico and the Dominican Republic, according to 2018 figures released by Trip Advisor.

The top ten vacation destinations for the Caribbean are:

Security issues in the Caribbean

We should start by saying that almost all people who travel to the Caribbean and have no security problems at all and would happily return, year upon year.

There is a high poverty rate across most if not all of the Caribbean, this has led to a rise in gangs across the region, of course some areas are affected more by gangs that others.

Gangs are rife in many parts of the Caribbean, they are part of every-day life and very deeply rooted in the music and culture of the Caribbean and have developed in some cases, from local street gangs into organised crime gangs with some gangs such as the Shower Posse having a strong international presence.

The major crime problem in the Caribbean is theft and robbery, violent attacks on tourist are extremely rare in most places – however, where street crimes do take place, gun and knives are often involved.

The Caribbean is known for drug trafficking and is part of the route from Latin America and Central America to the north and beyond, although US-led initiatives have impacted on this, it is thought that recent anti-drug operations in Mexico and Central America will increase the flow of illicit drugs through the Caribbean.

Visitors to the Caribbean are advised from partaking in drug use during their stay, and are reminded that across the Caribbean it is a criminal offence to use recreational drugs including marijuana.

What are the most dangerous places in the Caribbean? 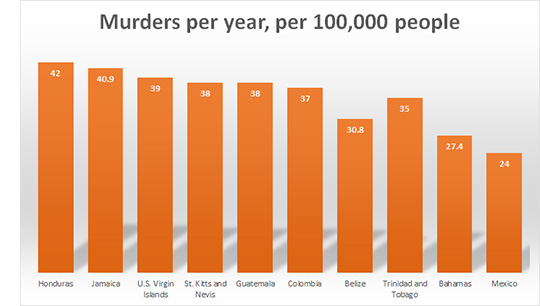 It should be noted that for the previous period in 2016, Honduras had a rate of 92 murders per 100,000 people. The violence in Honduras is mainly associated with the drug trade and also with street gangs such as MS-13 and the 18th Street gangs. 2012 was the worst year for Honduras murders, when the country saw a murder rate of an average of 20 murders a day.

Jamaica has managed to make vast improvements in its policing. 2005 saw the country at the top of the murder rate charts with a murder rate of 58 per 100,000 people. That equates to 1,674 murders for 2005. The reduction in murder rate and an overall drop in crime on the island has been put down to increased police patrols and curfews. There has also been more effective targeting of gang activities and organised crime.

What are the safest countries in the Caribbean?

Based on recent figures, the safest place in the whole of the Caribbean is the island of Aruba, off the coast of Venezuela. Aruba is the main island of the Lesser Antilles, lies outside of the hurricane belt and has a population of less than 120,000 people. The disappearance in Aruba of US tourist Natalee Holloway has impacted the island a great deal. Natalee Holloway disappeared on the 30th of May 2005, and the case remains unsolved.

The island of Martinique comes in a close second safest location in the Caribbean. Martinique is an overseas region of the French Republic and the island get over half a million tourists a year.

The top five safest places in the Caribbean

How to stay safe in the Caribbean

Petty street crimes, like purse snatching and pickpocketing, are an issue across the Caribbean and these crimes directly target tourists. There are a number of things that you can do to mitigate the risks of becoming a victim to crime in the Caribbean. One of the most important things, is to limit travel to the day time and to not travel at night. Plan travel too, know where you are going and make yourself familiar with a map at the very least.

Always ensure that you have the phone number for your Embassy or Consulate and for the Police. If you want the details of these, they can be found here: Travel Advisories for the Caribbean region.

As with any overseas travel, you should always take basic security precautions. One of the best pieces of advice is to always be aware of your surroundings and remember that things will be very different when it gets darker.

In most parts of the Caribbean, you can hire a car and travel around exploring coves, beaches and finding the best places to eat and drink. Be sure to plan for your days out, and always check as best as possible that the vehicle has enough fuel before you set off.

In most parts of the Caribbean, it is advisable to not travel off the beaten track, only go on organised tours with reputable companies. Health and safety isn’t a “thing” in the Caribbean, boat tours can be dangerous with safety levels well below what you might expect in Europe or the US.

Natural disasters in the Caribbean

The Caribbean region gets more than its fair share of natural disasters, many of the islands find themselves in the path of hurricanes almost every year, with the hurricane season in the Caribbean lasting from 1st June until the 30th of November.

It is advised to monitor local news and social media for weather warnings. In most cases, hotels and resorts are very good at warning guests and keeping them informed on pending hurricanes. They should inform you of their hurricane procedures and what to do in the event of a storm hitting.

Hurricanes can cause vast damage to buildings and critical infrastructure. If you can cut your trip short and leave before a hurricane hits, it is advised to do so. It may be many days before flights are in operation otherwise.

Devastating earthquakes have been known to hit the Caribbean region. Haiti was hit by a magnitude 7 earthquake on the 12th of January 2010 that saw in excess of 100,000 deaths. The exact number may however never be known and there is some controversy about this. It has taken the country many years to recover despite international aid.

Venezuela was hit by a magnitude 7.3 earthquake on the 21st August 2018, the country was very lightly affected with damage being limited. No fatalities were reported. Magnitude 3 and 4 earthquakes are quite common in the region. Again, just like with hurricanes, it is best to monitor social media and local news channels.

Advice on what to do in an earthquake can be found here: Earthquake Safety Tips.

The US Government department responsible for monitoring earthquakes, the US Geological Service has a great interactive map of the latest earthquakes in the region, see: Earthquake Map.

Using Private Security in the Caribbean

If you are interested in signing up for our security blog, please visit:
Security blog sign up

Intelligent (UK Holdings) Limited Group of companies is involved in many different areas of security, from the manufacture of body armour and military equipment, to close protection, counter intelligence and training. This blog covers much of our work, includes useful insight, articles and ideas.